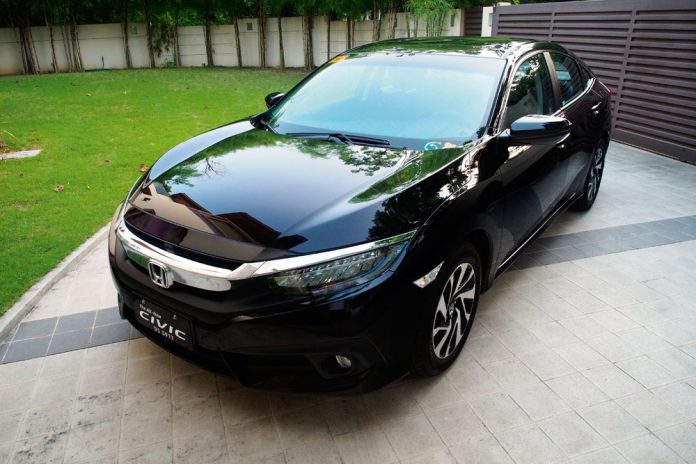 The previous generation Civic was neat and pretty. It also had a nice interior, and the drive was easy. But the plain-jane Civic proved to be too vanilla in a highly competitive market that had the super sexy Mazda3, the shapely Hyundai Elantra, and the ever reliable Toyota Corolla. Even Honda loyalists seemed to skip the old Civic and flocked to the large subcompact City instead. However, Honda is trying to do right by the nameplate that made the badge legendary in the first place, by bringing sexy back with the all-new 2016 Honda Civic.

While the old one, codenamed FB, only managed to get a shrug and a “meh” in terms of looks, this 10th generation Civic, dubbed the FC, is certain to draw gasps and loud wows. The biggest Civic yet, this has a wheelbase stretched by about 30 mm. The body length grew by a whopping 105 mm, and it has become 45 mm wider, too. The increase in girth is one thing, but what really stands out is the superior makeover with its looks.

The new Civic has a long, shapely bonnet up front that resembles a roadster’s. The fascia has the solid wing-face design of recent Honda models, but what we find striking is the grille—an extruded metallic brow that stretches horizontally to cover the headlamps. The sleek headlights themselves are infused with LED daytime running lights, and the bumper has air-dam type openings for the fog lamps. Subtle elements make the Civic’s front look so wide, you could mistake it for an Accord the first time you see it.

The side profile also shares the stretched look, culminating in a fastback-style rear portion that makes the car resemble a coupe. The piece de resistance, though, is the gorgeous rear with the crimson, stylized taillights that form two opposing Cs. The reflector fuses with the top part of the boot, further accented by a slight dip in the middle. This results in a bold and truly unique rear treatment, besting even European designs. Driving around town in the Civic, you would think we were in a Ford Mustang, the way pedestrians were pointing at us and whispering. It is just that beautiful.

The interior has Honda’s usual meticulous attention to detail, and the fit and finish make passengers feel like they are in a premium automobile. Despite the absence of leather, sophistication is achieved through visual cues like plastics with faux stitching, and the quiet use of brushed silver accents along the doors and trimmings around the dashboard. But apart from the looks, it’s the feel of high quality materials, from the black fabric draping the seats, to the suede-like material brushing against the elbows in the compartment by the armrest.

Like in the HR-V, the center console sits tall, and is elevated to have a second tier below where it hides additional cubby holes, as well as ports for power, HDMI, and USB. The wall-like console effectively separates the front passengers in their respective spaces, and being so cocooned in the cockpit makes the driver feel like being in a sports car. Near the short shifter are the buttons for the Eco and the electronic e-brake.

Behind the wheel, the instrument panels are distinct digital screens for the speedometer, fuel, and temperature gauges. When you push the engine start button, it is a treat to watch the boot up animation for these displays. If you don’t like dials and knobs, then you will love the new Civic. Like most Honda vehicles we have tested recently, the head unit is a buttonless, seven-inch touch screen. Aside from audio control for music, this monitor also does alternating duties as the display for the automatic AC and the vehicle’s functions, and as the feed for the reversing camera.

The front buckets are stylishly shaped like racing seats, and although a bit firm, we found them comfortable on long rides. The second row seats are wide enough for two-and-a-half adult shoulders. Even if they’re six feet tall, this part of the cabin has enough knee room to accommodate them. Thanks to the extended length of the new Civic, the cabin now equals the class-leading Toyota Corolla in terms of space. With all the generosity for the passengers, though, something’s gotta give, and it’s the space in the trunk that suffers, which is a tad too small.

What matters most to buyers of workhorses, of course, is the drive, and the Civic is better than ever in this regard. Under the hood is Honda Earth Dreams’ 1.8-liter SOHC four-cylinder married to a continuously variable transmission (CVT). When rubber met road, this proved to be a powerful union, making good use of the maximum 141 hp at 6,500 rpm. Torque is at 174 Nm during 4,300 rpm, and it provided more substantial amounts of thrust as compared to your typical compact.
There is an Eco button that puts all the power on a leash, in exchange for making the car sip the petrol. We pretty much left the setting to Normal mode, and even so, the trip computer reported a thrifty 8.6 km/L at an average speed of 20 kph. Shifting the short gear stick to S, we were really able to release the beast, with the needle quickly pointing to north of 120 kph over a rare open lane on Edsa. Our only gripe is that the 1.8E did not come with paddle shifters, as manual operation of the transmission would have put all those horses to even more efficient use.

In our hands, the small steering wheel was expectedly light and easy, but it gave the driver confidence of control when speeding up. Response is quick and excellent as we swerved to avoid a red light-beating, motorcycle rider at an intersection. The brakes are quick to bite too, as we screeched to a halt, avoiding the erring biker by mere inches. The new Honda Civic is an easy-to-drive car with a whiff of sportiness that can inject excitement into your otherwise boring commute.

The review unit Honda Philippines lent us, the 1.8E, is the one to buy, and it costs an acceptable P1,088,000. For just P55,000 more you can get the Modulo body-kitted version. The higher spec Civic is the RS Turbo, a descendant of the SiR, which made a splash in the late ’90s. This one has a smaller displacement 1.5-liter DOHC VTEC engine, but it more than makes up for it with direct injection and turbo. It comes at a significantly pricier P1,398,000. There is a Modulo version for the RS as well, which costs P1,445,000, and the ultimate RS Turbo Modulo Sport that requires a pretty penny at P1,510,000.

Honda has successfully brought action and excitement back to the Civic. It is sexy, fun to drive, loaded with tech, and pushes the envelope for the C-segment. For that, we recommend the Civic 1.8E as the best, bang-for-the-buck compact car that you can buy today.

Turning over a new leaf of fortune