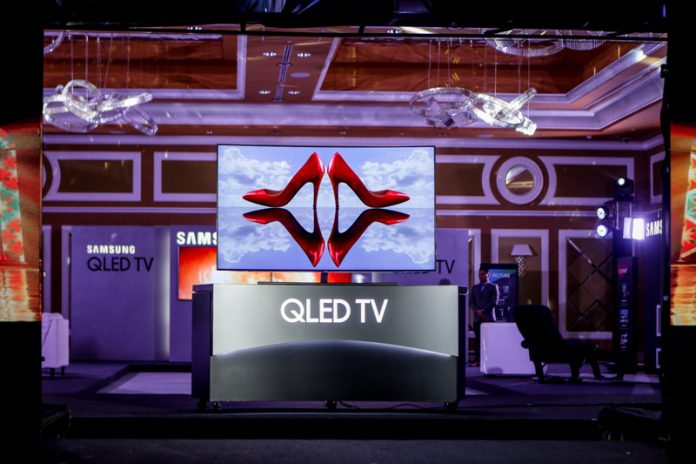 Watching TV has changed through the years and is now more central in the lives of consumers. From being a mere source of entertainment, TVs are now considered as windows that let users experience the world right from their homes.

In a gathering held at Okada Manila titled “The Next Frontier,” Samsung Electronics Philippines Corporation declared a new era of television viewing as they officially launched the QLED TV in the country. Hosted by TV personality and radio jock Sam Oh, the event brought together Samsung executives, led by President Kevin Lee, media, and valued dealer-partners as they witnessed how the QLED TV delivers a next generation display that overcomes the disadvantages of other competing technologies.

Highlighting this groundbreaking technology, the tech giant brought in Korean celebrity Kim Soo Hyun as a special guest to support the local launch of the QLED TV. The actor expressed his excitement as he revealed the product that aims to give consumers a viewing experience like no other.

With its exclusive Quantum Dot technology, the Samsung QLED TV turns light into perfect color, making a powerful combination that revolutionizes picture quality. The new television line also offers HDR 1500 brightness and 100% color volume expression, enabling viewers to watch scenes just as how the creator intended them to be. It can also reproduce almost any color known to man, making HDR content more vibrant and natural-looking.

A smart TV needs an equally smart remote, and with the QLED TV’s One Remote Control that covers all connected devices, users will have an easier time navigating whether they want to play games, watch sports, or stream their favorite TV shows.  Users can also turn their mobile phones into a personal remote through the Smart View app. More entertainment options are provided by the Samsung QLED TV as it comes equipped with apps, services, and other content through the Smart Hub.

Beauty and functionality work hand-in-hand in the Samsung QLED TV. Its revolutionary design uses an Invisible Connection cable for other TV connected devices, removing the pain point of dealing with unsightly and tangled cables, and making it a great addition to any room. To further add to the clean design, users have the option to avail of the no-gap wall mount, which allows the TV to sit flush against the wall. Also available are an array of stands, such as gravity and studio stands, that can blend in with any living space.

The new line-up of the QLED TV is available in authorized Samsung dealers nationwide.

It’s all in the details