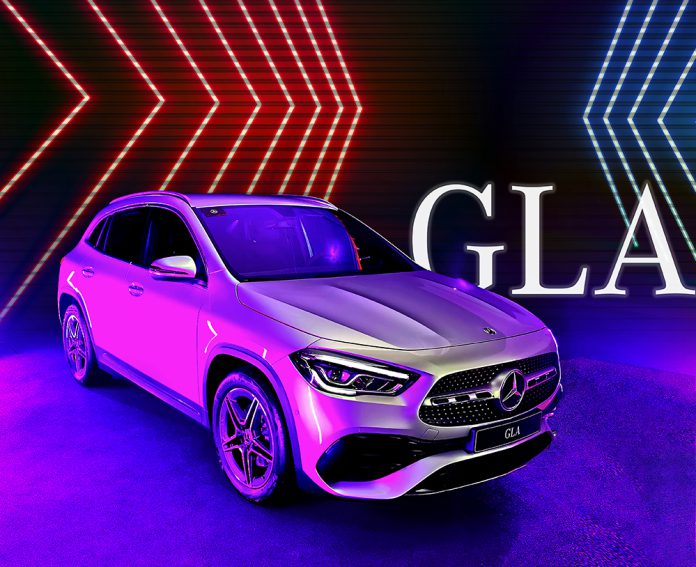 For Filipinos, a Mercedes-Benz is more than just a car. There is an emotional attachment to the brand.  It is an ambition, an aspiration culturally ingrained in us since we were children. To own a Benz is a sure sign that someone has made it. No wonder then that of the many car brands here, only Mercedes-Benz has a colloquial nickname among Filipinos—“Chedeng.” Of course it is also the term of endearment for local lasses named Mercedes, but to this day, say “Chedeng” and the first thing that comes to mind is that legendary three-pointed star.

Most recently, the new GLA is the eighth model to join the line-up and rounds off the current Modular Front Architecture (MFA) from Mercedes-Benz. At the same time, it represents the entry level into Mercedes-Benz successful family of SUV models.

The new GLA combines the best from the two high-volume segments, the compact cars and the SUVs. It embodies the perfect synergy between pure beauty and robust off-road elements. It carries Mercedes-Benz’ signature SUV design and trailblazing technologies as a true demonstration of modern luxury.

Setting a theme for the GLA 200 AMG Line, it boasts attractive sporty appearance both inside and out. In particular, the AMG Body Styling comes with a diamond radiator grille with pins in chrome, 19inch 5 twin-spoke light-alloy wheels, black roof liner and polished aluminium roof rails. The side and rear views are characterized by the muscular shoulders of the vehicle. In addition, the new generation multifunction sports steering wheel in Nappa leather stands for exquisite look and feel of the new GLA.

The new GLA makes a further step in terms of safety courtesy of its driving assistance systems with cooperative driver support. Mercedes-Benz Intelligent Drive combines safety and convenience innovations. With these intelligent systems, Mercedes-Benz is not only setting standards in automotive engineering, but is also taking another important step forward on the road to accident-free driving. This therefore allows the driver to experience a new dimension of safety, convenience and stress relief.

Enjoying the solitude and sharing it with everyone at the same time is possible with modern connectivity services. It is equipped with Mercedes-Benz User Experience (MBUX). The MBUX multimedia system comes with 7-inch instrument and media display and has its own intelligent voice assistant which is activated with the code word “Hey Mercedes”.

Another highlight is the comprehensive touch operation concept – the combination of a touchscreen, touchpad on the center console and touch control buttons in the steering wheel. In addition to the intuitive operating experience, less driver distraction is another advantage.

The MBUX feature is a new era of connectivity that can also be seen from last year’s 2019 Mercedes-Benz A-Class A180.

If budget is a concern, the A-Class is your ticket to ride.

First introduced in 1997, the A-Class was so named because the first two generations were minuscule subcompact hatchbacks, designed to be city cars. The third generation A-Class became wider and longer, and the fourth generation we have here grew even larger. In fact, the 2019 model is now practically the same size as the 1993 C-Class sedan.  The A180’s wheelbase clocks in at a long 2,729 mm, the width at 1,796, and the body length at 4,419. For size reference, the car is roughly the dimensions of a Mazda3 hatchback, so it is no longer an A-segment car by any measure.

The doors open wide and close with that confidence-inducing klug. The dashboard is as minimalist as an Apple store, and all instruments are lined up neatly on two tiers. The upper deck has a wide rectangular tablet that houses two electronic screens, comprising the MBUX. Behind the wheel is the interactive instrument panel that toggles digital renderings of the speedometer and odometer. Other vehicular information like fuel efficiency and trip computer can also be summoned via the thumb rockers and levers on the steering wheel.

The center screen also displays the entertainment system, video feed of the reversing camera, and the optional navigation map, and also provides wireless connectivity for both Apple CarPlay and Android Auto via Bluetooth, similar to the new GLA. There are three ways to interface with the MBUX system.  The first and most intuitive is by touch screen.  Second is via the trackpad and scroll wheels in the console where the shifter usually is.  And the third way is by voice commands, which was intended to replicate Siri or Alexa.  Unfortunately, saying “Hey Mercedes” reveals the artificial intelligence to be more like Hal from 2001: A Space Odyssey. It took several tries for the MBUX to understand this driver, and it involved speaking slower, trying different volumes and accents.

Despite being their most affordable model, we were pleasantly surprised that Mercedes did not scrimp on the safety features. There are the industry-standard inclusions, like airbags, ABS brakes, electronic brake-force distribution, and cruise control, but they also included lane assistance sensors, proximity alerts, and a real-time radar that warns you of upcoming obstructions.

The well-engineered engine is just half the story, though, because the stellar driving dynamics really complete the A180 experience. The wheel is much easier to turn than in the C-Class, which made parking and U-turns a breeze. On the highway, it tightens just right to give a good report of the road surface. The aforementioned width of the body makes the A180 feel planted on the pavement, and you can feel the car hugging the road at speeds north of 100 kph. The A180 is a professional driver’s car designed to be enjoyed by the common Metro Manila motorist. The latter would definitely appreciate its fuel-sipping ways, to the merry tune of 10.7 km/L at an average speed of 20 kph.

The savings at the pump may at least be able to offset some of the asking price for this Benz, which is at P2.69 million. If, like me, you had always dreamed your first Benz to be a sedan, or if a diesel powerplant is more to your liking, then you may be pleased to know that Mercedes-Benz Philippines also offers an A180D sedan at just P2.79 million. The prices may seem prohibitive, but the scales are counter-balanced by the amazing engine, road manners, and generous creature comforts of the A-Class. It even has Gottlieb Daimler’s signature of approval right on the windshield. The A180 is a good deal, but its most tempting allure is that it has the potential to be anyone’s first Chedeng.

For the full review on the Mercedes A-class, check out Asian Dragon’s December 2019-January 2020 issue, available for order on Facebook and Lazada, or downloadable from Magzter.

Turning over a new leaf of fortune