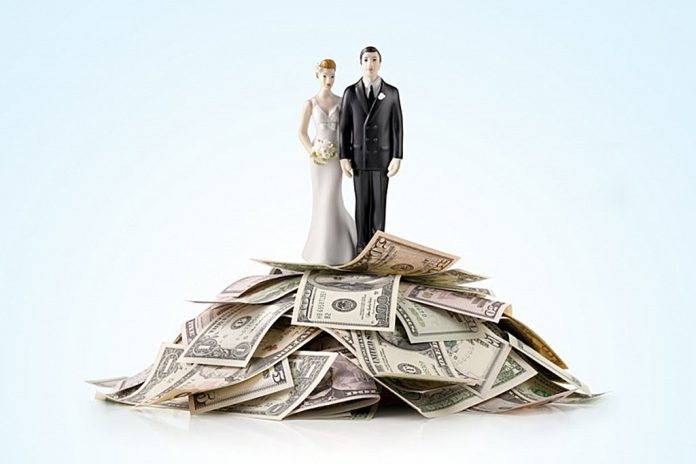 The wedding plans are in full swing, but one topic that has not been touched is the dicey issue of how to deal with finances once partners are legally a couple.  Both are working professionals, but know that things are not that simple when it comes to handling finances when it comes to a certain culture.  Is there a right way to do this? No one would want to start off on the wrong foot.

Money, money, money—sometimes, it’s just one of those elephants in the room that people prefer to ignore, but it’s never going away, so let’s just deal with it head-on.

I have to confess that when I got married, we never discussed how to deal with this.  The day after we got married, we just decided to go to the bank to open a joint savings account.  The first deposits we made in that account were the le kuan or gift checks we received from the wedding. Paychecks eventually went into the joint account.  I managed the day-to-day finances.  Bigger investments were joint decisions.  We both keep individual accounts, but they’re not actively used.  We’ve been fortunate that things just worked out for us.

By the way, my cash dowry was kept in a separate account. My husband respected the fact that it was from my parents, for me. We eventually invested that, too.

Option 2 worked for my friends who both had to help out their respective families: They both kept separate accounts, but had a joint account that they put equal amounts into. This way, they’re free to do whatever with the money in their individual accounts, whether it’s used to buy her dad’s medicine, or pay for his mom’s medical bills.  Family trips, living expenses like rent and utilities, tuition, and date nights are funded by the joint account.

Option 3 is individual accounts.  The other spouse’s name is on the account but they do not meddle in each other’s money.  Joint expenses are joint expenses, but all major investments are individual decisions. This has worked for one couple for almost two decades.

How detailed you want this discussion to be depends on the personalities involved.  If you or your partner is detail-oriented, maybe it’s better to clear things up from the get-go to avoid issues later.  If he’s the type who prefers you to run the show, what’s the expectation from you?  If you’re the type who doesn’t want this responsibility, bring it up now.

What about if there are future gifts from family to you as a couple—whether it’s land, cash, investments, or jewelry?  We decide on what to do with this jointly.  It might not work for everyone, though.

Whichever option you chose—and there are many other variations of the ones I brought up—can I just give a simple piece of advice?  Maintain a level of financial independence and be financially responsible. I’m not sure if these are the right terms, but this doesn’t mean you have to have a secret individual account stashed away somewhere. I might be the other half of a joint account, but I am relatively free to do what I want with this account. I can buy a purse, go on a trip, eat out with my friends, and no one audits my expenses. I spend within reason.

A spouse (whether you’re a husband or a wife) should not have to beg the other partner for money, especially if both are contributing to the family coffers.  We are educated adults.  Let’s respect each other.

This article originally appeared on Asian Dragon Weddings 2019 issue, available for order on Lazada or downloadable from Magzter.