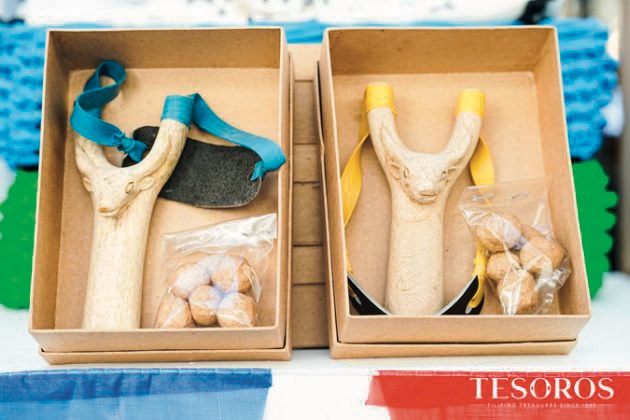 Millennials now are working adults who yearn for the nostalgia of what once was: era-inspired street fashion, the resurgence of vinyl players and records, polaroid cameras and vintage filters. A generation that saw the rise and fall of different kinds of technology has gotten disillusioned from all that novelty; their successors are, in turn, growing into a period of electronic convenience, where technology is the norm. As the ascendant Gen Z dives head-first into their mobile devices without so much as learning how to turn the pages of a book, the new Millennial workforce thrives on this need to relive their so-called glory days, longing for the simplicity of their childhood.

It makes perfect sense now that Bambi Mañosa-Tanjutco leverages this nostalgia to run her philanthropic project, Awit at Laro. Growing up a child of renowned Filipino architect Francisco Mañosa (whom she fondly refers to as a Peter Pan, a Pied Piper, a very “Montessori” sort of figure), Bambi recalls her earliest exposure to creativity through her father’s elaborately set-birthday parties. He didn’t just stop at dressing up as a clown—he built entire worlds for Bambi and her siblings, such as the haunted house he built for her brother, whose birthday falls on October 31st. Her late father always believed in the concept of “bringing the environment to the child,” a parenting style powered by this mindset she once thought was normal, but which she later realized was unique to her upbringing. “Growing up with a dad like that,” she recalls, “creativity for me became a way of life.”

How then does this inform her philanthropy? “I want to make kids more inquisitive. Rather than feeding everything to them, make them more curious—about how to play, how to elevate their play to a different level, how to level up everything they do.”

“‘Play’ is expressed in different ways. It’s not just playing outside. It can be in music, dance, storytelling, art. Everybody knows how to play. And Awit at Laro is there to remind even the older generations that you’re never really too old to play.”

What exactly then, is Awit at Laro? This music and art collaboration between Bambi and longtime family friend, singer-songwriter Gary Valenciano, serves as a celebration of traditional Filipino songs and outdoor play. Bambi aims to turn the long-forgotten normalcy of scraped knees, laughter, and sweat on the streets from games like tagu-taguan and mataya-taya into a back-to-basics approach to child’s play—“Something more natural, more organic,” she says.

What started as a go-out-with-a-bang event for the closing of her Creative Kids Studio turned into the beginning stages of the movement now known as Awit at Laro, a multigenerational platform for kids and adults alike to return to the nostalgia of growing up as Filipinos—re-introducing games such as patintero and agawan base to generations of parents and children who now rely on mobile technology as a means of pacifying and placating.

The movement proves to be a sharp, soothing breath of fresh air, especially in an age where, as Bambi puts it, when the digital world came in, “Filipino culture and tradition kind of just got watered down.” Reintroducing kids and adults to these elements of Filipino culture became a means of repurposing and repackaging a cultural identity on the verge of being eclipsed by technology. Awit at Laro as a movement, therefore, becomes an advocacy of sorts.

While explaining how she was voted in as president of Museo Pambata in January, Bambi explains that the project, in conjunction with her work at the Museo, became her playground and platform for reintroducing “what it is to be a Filipino; to be able to introduce love of country, and of culture, in a very playful way.”

It’s safe to say that Awit at Laro and everything it stands for have become Bambi’s mission in life. “There’s so much more soul in going back to basics,” she muses. “You introduce this conversation between kids and adults, kuwento about how kids back in the day used to play outside, and how kids these days can find fun in that, too.”

The need for a dialogue to bridge the gap between these generations became the impetus for Awit at Laro, and continues to inform her work to this day. “All of this kuwento about how people used to play outside was so rich. And it was all about connection, and making friends. Not online, like today, because these relationships were outside, on the playground, in the street. It’s how you practiced life skills by doing something so fun.”

It’s a much-needed point of reference, considering how alarmed Bambi is by the staggering rise of depression among kids today. “As a world today, kids, and even adults, have forgotten how to play. We’ve forgotten how to relax a little bit, and take things lightly. The Filipino is a natural komikero—we love to smile, we love to laugh, we love to put on a show; that’s our nature. And I realize that with the change in the whole digital landscape, we sort of forget that.

“Legacy is every person you touch,” Bambi says. She recalls how her dad influenced her life and her choices, to the extent that her conscience now has the voice of either God or her dad. To this day, she still gets messages from his former students, artists, or even people her father has met in passing who share how her father changed their lives and inspired them to be better Filipinos. “It’s impossible to get through all of them,” she says with a laugh. “But I believe in the saying that if you can change the way even just one kid in the world behaves, you’ve already made a difference.”

And if Bambi’s God-given mission is to bank on nostalgia to remind Filipinos today of who we are and what we are capable of, then her mission is well on its way to being accomplished.