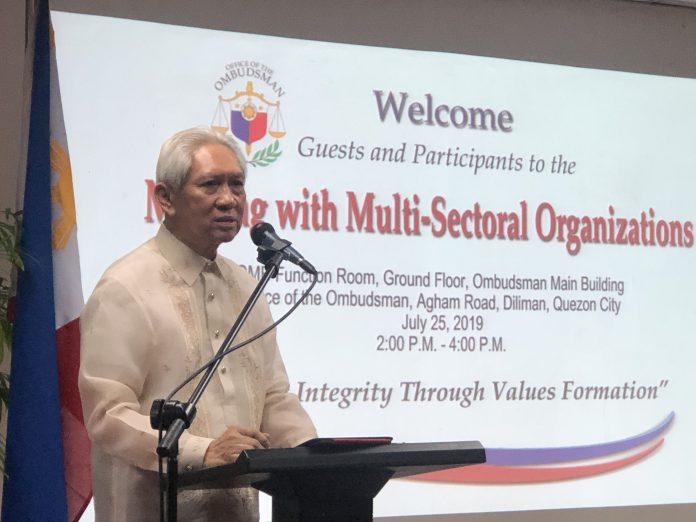 “When will corruption end? Kailan ba talaga ‘to? Hanggang kailan?” [“When will this [end], really? Until when?”]
These were the questions raised by Philippine President Rodrigo Duterte during his fourth State of the Nation address at the Session Hall of the Batasang Pambansa in Quezon City.

Transparency has been an issue for decades, in government transactions and politics. Corruption behind the walls of authority occurs at several levels: grand, petty, and political.

Ombudsman Justice Samuel Martires responded to this question during his speech to multi-sectoral organizations at the Office of the Ombudsman, Diliman last July 25. He said, corruption will never end.

“I was seated directly in front of the president, that was at the top of the gathering, and I said, ‘Never. Never shall we stop corruption… not in the next one hundred, and one thousand years. Corruption will never stop.”

Ombudsman Martires focused on the need to trace the origin of corruption, not only in politics but society as well.

Corruption, according to researchers, has been destabilizing society and endangering the rule of law, as it threatens sustainable economic development. ethical values, and justice.

Dependence on the government for housing, healthcare, education, security, and welfare makes the citizens vulnerable, since it stalls service delivery. The delays in infrastructure development, poor building quality and layers of additional costs are all consequences of corruption.

“Investigation and prosecution come after a corrupt act has been committed. We have to prevent. And the only way to prevent is to go back to the past, where our moral standards were high, where our moral values were based on religion, not on society or government. Where we fear God, we respect God. That is the only way we can change this society, not just this government. We have to extend the anti-graft and corrupt practices to the private sector.”

Ombudsman Martires promises to shift from prosecution and investigation to focusing on integrating values formation and religious education as the main entry points in preventing such issues by starting with the Campus Integrity Crusaders (CIC) Program.

The CIC Program has been accredited by the Office of the Ombudsman. It cultivates empowerment of youth in their involvement in corruption prevention by developing their leadership skills and instilling values of integrity and social responsibility.

Inspired by the program, Ombudsman Martires plans to start with the young through a Campus Integrity Program, including studies on values and religion in the curriculum of the Department of Education (DepEd) as well as the Commission on Higher EDucation (CHED) for both public and private sectors.

He further challenged the Commission on Higher Education (CHED) and the Department of Education (DepEd) to include the program in the curriculum of every public and private school, lest they are branded for tolerating corruption.

The DepEd and CHED are pressed to immediate action regarding this issue after being directly mentioned by the Ombudsman.

“Yun lang ang tanging paraan para tayo ay magbago — balikan natin yung nakaraan.” [“This is the real way for us to change— let us return to the past.”]