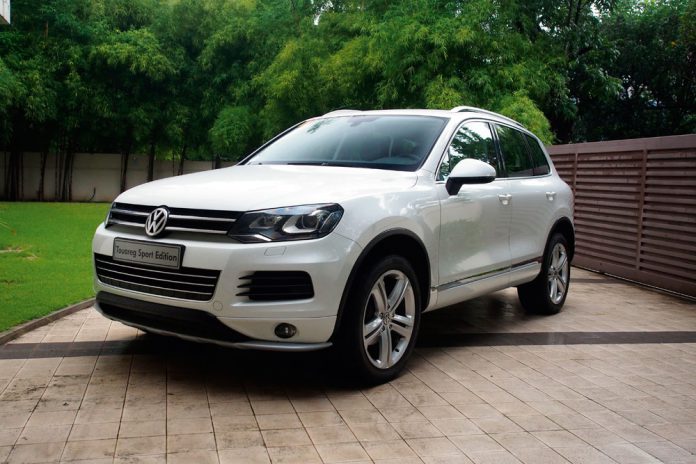 Volkswagen named their midsize SUV after the Tuareg people who are indigenous to North Africa.  What could have inspired this very European auto-making company based in Wolfsberg, Germany to name their premiere sports truck after tribal folk a continent away?  No one really knows, but VW has an affinity for strange names.

Consider, for instance, that their compact SUV is called the Tiguan, and they named their minivan the Touran.  After a week with the Touareg courtesy of Volkswagen Philippines, we came up with a theory as to why this flagship SUV was named as such.

The word Tuareg is literally translated as “free folk,” and like the nomads of the Sahara, the Touareg is built for wandering through roads off the beaten path.

When you see it, though, it hardly looks the part.  It looks nothing like a rough-riding Jeep Wrangler or Toyota FJ Cruiser.  Nope; like its stablemates Golf, Jetta, and Passat, the Touareg is muted and understated.  VW has always preferred to let performance rather than sheet metal sell the car, and that is why at first glance, this second generation SUV has that blink-and-you-miss-it quality that is the opposite of “head-turning.”

The Touareg’s face is inconspicuous, with only the horizontal lines in the grille and bumper providing texture. The headlamps are bi-xenon projector type, and these square cylinders are framed by LED daytime running lights.  A silver scuff plate underneath the bumper delivers the only modicum of styling. The side profile is just as vanilla, adorned only with stemmed side mirrors and chrome garnishing at the bottom of the doors. The rear end is a curvy tailgate, equipped with similar tail lamps that we see on most Volkswagens. The 20-inch, five-spoke alloy wheels wrapped in Pirelli rubber are also worth noting, and they fill in the wells quite nicely.  Unassuming, unpretentious, and natural, the Touareg proves that sometimes simplicity is beauty itself.

Despite the anonymity of the outer shell, the spacious interior makes the occupants feel like they are indeed in a German marque automobile.  Ebony leather clads the seating surface, steering wheel, and elbow rests.  Dark charcoal wraps the dashboard with thick plastics, with sparing bits of black or silver panels as relief.  The button and dial arrays are neatly arranged, choosing to be formal rather than hip.  It also has quad-zone climate control and a very useful reversing camera streams the video to the monitor.  We found the Dynamic Light Assist of the headlamps especially notable. These smart lights adjust the level, range, and pattern of its projected illumination.

That said, the Touareg comes up a bit lacking in the luxury department as it goes up against the likes of the BMW X5 and the Mercedes-Benz ML350. For starters, it does not even have a push-start button, a feature now so basic, even my Corolla has it.  Nope, the Touareg requires you to oddly insert the stubby key fob into the ignition slot and turn.  It also lacks creature comforts we have come to expect in this price range, such as a moon roof, electronic seats, automatic telescopic steering adjustment, or even a more technologically updated head unit.  The rudimentary touchscreen panel did not even have Bluetooth connectivity.

However, the Touareg has the muscle where it counts.  Like bringing a tank to a gunfight, the Touareg errs on the side of overkill.  Under the bonnet is a 3.0-liter, V6 turbo diesel with 245 horses and an impressive 550 Nm of torque.  Given that much pull power, it is quick to send the speedometer needle to the 100 mark.  The eight-speed transmission is as suave and smooth as Don Draper, sending you ahead of the pack with nary a hint of gear change.  Like our experience in the Golf, we love the sporty handling of this VW.

Despite its rather large proportions, the Touareg was easy to steer in closed-in traffic, and it provided tighter controls on the open highways.  It conquered uphill climbs with the greatest of ease, despite the vehicle’s 2.25-ton weight, thanks to the 4motion permanent all-wheel drive.  Fuel economy is about par for a large six-cylinder, achieving 6.2 km a liter of diesel in the traffic-cursed metro, as we averaged a pace of 18 kph.  The air suspension with electronic shock absorption control ensured a stable yet very comfortable ride in this SUV, and the excellent NVH (noise vibration and harshness) sealing in the cabin made us forget the vehicle was powered by a large diesel engine.

For going through dirt, rock, and other unpaved surfaces, one dial on the center console toggles On- and Off-road.  This adjusts the suspension settings with options for Normal, Comfort, and Sport. The vehicle also automatically adjusts for traction and stability. Another dial adjusts ground clearance, allowing the vehicle’s ride height to vary from the Normal mode’s 11” to a hair shy of 15” during Sport mode.

When set to the latter, the lack of a stepboard made disembarking a bit of a leap for the average-height Pinoy, but in exchange, you get 580 mm of wading depth.

The Touareg is a terrific vehicle to buy—if you can afford it. The local merchants of Vee-Dub offer it in a single trim, the Sport Edition featured here. This “people’s car” costs a staggering P4.29 million. Most citizens of this developing nation may find that price a bit discouraging, since well, you could buy three Toyota Fortuners for that price. But affordability is subjective. Some of our, ahem, wealthier readers may see the Touareg as a downright bargain, considering that its brother cars (with which it shares a platform) Audi Q7 starts at P6.69 million and the cheapest Porsche Cayenne is P6.35 million.

Obviously, the Touareg is not for everybody.  It is for that hacendero who wants to survey his hectares in peace and confidence.  It is for that executive who wants a German car but is unwilling to pay more than he has to.  It is for the discerning driver who lusts for a vehicle with excellent driving dynamics and a surplus of power.  Like its nomadic namesake, the Volkswagen Touareg was made for those unafraid to traverse terrains outside their comfort zone.