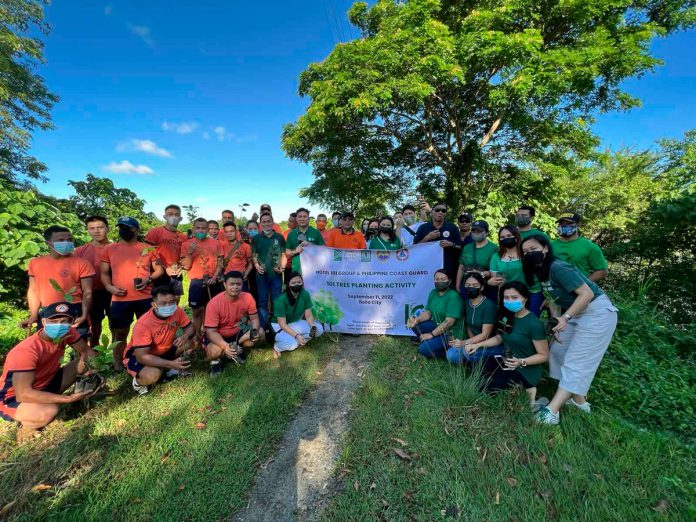 Following a successful launch of the 101 STAY GREEN campaign in Manila in partnership with the Philippine Coast Guard Marine Environmental Protection Command and the Pasay City Government, Hotel 101 Group brought its 101 STAY GREEN campaign to Iloilo City. The sustainability initiative, highlighted by agreements with the Philippine Coast Guard Aviation Force and the support from the Iloilo Government was launch on September 12, 2022 at Injap Tower Hotel.

“I am also happy to be strengthening our partnerships between the Iloilo City and the Philippine Coast Guard Aviation Force led by CG Capt. Christine Diciano, both of which started or were ignited during the height of the pandemic, as we worked closely to help each other survive and manage our health crisis,” says Hotel 101 Group General Manager Gel Gomez.

Iloilo City Mayor Jerry P. Treñas, through his representative, Iloilo City Environment and Natural Resources (CENRO) Officer-in-Charge Engineer Neil Ravena, relayed his message of thanks for Hotel 101 Group’s commitment to sustainability. “As we gather today for the STAY GREEN program of Hotel 101 Group, we are reminded also of our commitment in protecting the environment through the many initiatives of the city,” he remarked.

“We could not achieve what we have now, if not for our partners, like Hotel 101 Group. That’s why I am very grateful we collaborate with them because we make better and more adapting communities,” Mayor Treñas wrote.

“Iloilo City has always been committed in maximizing our potentials in protecting the environment to lessen the impacts of climate change, that is why we have put premium on environmental management,” Engineer Ravena said reading Mayor Treñas’ message.

Iloilo City has identified areas for cultivation of Tree Park Network across the city, including the Iloilo Beach Forest in Boulevard, Molo, Hinactacan Mangrove Forest in Jaro, the Lanit Tree Park in Jaro for endemic species of trees, among others.

“Today’s successful 101 Tree Planting activity is just a start of more projects together with PCG and the Iloilo City towards sustainability and the environment,” Assistant Hotel Manager James Riego De Dios said.

“Hotel 101 Group is committed to making small collective efforts in promoting Sustainable Tourism through the 101 STAY GREEN program and beyond,” GM Gomez said. “As tourism is one of the contributors to Climate Change, we strongly advocate for reducing our carbon footprint, operating more sustainably, and supporting the communities where we are located,” she added.

Department of Tourism Western Visayas Regional Director Ms. Cristine Mansinares stressed to continue to promote a safe, fun and sustainable tourism and to amplify what Hotel 101 Group is doing as an inspiration to others. “These partnerships and campaign will certainly help increase awareness among guests on pressing environmental concerns, and gradually change behaviors,” Regional Director Mansinares added.