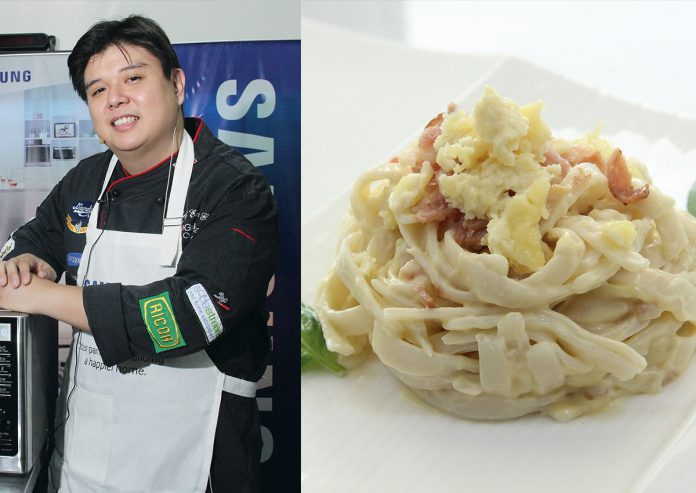 Being the son of culinary icon Sylvia Reynoso Gala, Ernest Reynoso Gala naturally grew up with good food in the kitchen every day of his and his sister Morella’s life. Besides preparing delicious meals for the family, his mom handles cooking and baking classes in her own culinary school in Pasig City, and lots of today’s most famous chefs and culinary luminaries were at one point her student. Growing up in this environment, Ernest found it easy to decide that he wanted to become a chef. So he assisted his mom in class, took up culinary arts, and opened his own culinary school—GalaStars Culinary School—right beside his mom’s.

Like his mom, he teaches different culinary subjects, ranging from baking and dessert-making to cooking various types of cuisines, holiday fare and, yes, even family heirloom recipes. When he conducted a special series of hands-on cooking classes for Samsung Digital Appliances’ Fifth Cooking Workshop, Chef Ernest included the recipe of Easy Carbonara. It’s his Filipino-style interpretation of the original carbonara recipe, which goes back to World War II, when soldiers captured by Americans cooked their food in a big pot using wood (carbon), and one time added eggs, milk, pasta, bacon, and leftover cheese into the pot to come up with Pasta Carbonara.

Chef Ernest innovated on the classic pasta recipe, and came up with this “short cut” that’s both delicious and easy to prepare. He makes it every time he goes to his friends’ homes, because it’s their special request. It has, therefore, become somewhat of an heirloom recipe for him, and he shares it with everyone who wants a taste of it.