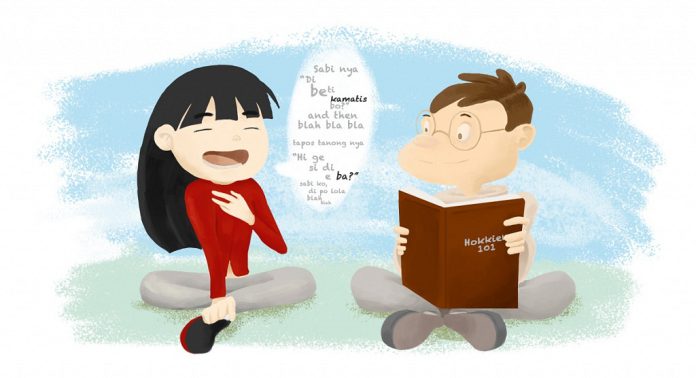 “So what is your mother tongue?”

Monolinguals and bilinguals are impressed I speak four languages. For us who grew up in the Philippines, being multilingual is pretty normal.  In fact, many of my Chinoy friends speak five languages, since they are from the province, while I am a Manileña.

I get stumped when asked to identify my mother tongue.  Let’s see: I grew up speaking Tagalog, English, and Hokkien. Tagalog is spoken with the yayas and drivers and pretty much everybody outside the home. English is the medium of instruction in school and the language of media.  My siblings and I talk to each other in Tagalog and English. Then there’s Hokkien, a.k.a. Fookien.  To those who don’t know, it is the native tongue of most Chinoys.  It is the language of the elders, without which there was no way we could communicate with the grandparents. It’s also deemed the respectful language to use with them.  More on this later.  My fourth language is Mandarin, acquired later in life, in my mid-30s.  I stayed in Mainland China and Taiwan for eight years and became fluent in it.

I’d say that my native languages are English and Tagalog.  Hokkien and Mandarin are not—and I can already visualize eyebrows shooting up at my last statement.  Hey, it’s my story.

When you say “Chinese language,” most people think of Mandarin.  In reality, there are many Chinese languages, just like we have many Philippine languages.  I have to clarify something here.  It is not right to label Tagalog as a language, and Cebuano or Hiligaynon as dialects.  The key word is “mutual intelligibility.”  A Tagalog speaker and a Bicolano will not understand each other, and because of this, Bicolano is very much a language in its own right.  Tagalog is referred to as a dialect if we are comparing Manila Tagalog and Batangas Tagalog, where speakers understand each other despite the differences.

Anyway, I say Tagalog and English are my first languages because they cut across all four skills (listening, speaking, reading, and writing), and I can easily switch between them.  I do not consider Chinese, whether Hokkien or Mandarin, my mother tongue.  Mandarin is understandably not, since it isn’t spoken in the Philippines.  It is because of my immersion abroad (eight years) and my current profession as a Mandarin teacher (another eight years) that I have become more fluent in it than Hokkien.

When I went to Taiwan in 2003 and discovered that the Taiwanese also spoke Hokkien, I bought books that even came with CDs.  I wanted to expand my vocabulary but sheeesh, some help they turned out to be. The phonetic symbols confused me, and some words and accents were unlike the Hokkien I grew up with.   I eventually gave up.

Information overload! If I, a Hokkien speaker, am already discombobulated by the seven to nine tones, depending on the variety of Hokkien and the tone sandhi chart (tones change when words are combined), how do I transfer this knowledge to another brain when even I can’t make heads or tails of it? I didn’t realize there were so many types of Hokkien, and it’s not even a matter of being between countries, say Singapore Hokkien versus Taiwanese Hokkien.  Manila Hokkien and Cebu Hokkien are also different—mutually intelligible, of course, but with pronounced differences in articulation. Insane!  I was about to give up and just go with the original plan of doing a repeat-after-me methodology when…

One day, I came across a series of learn Hokkien videos by a Tomdavid.  He “Tagalized” Hokkien and compressed the eight tones of Hokkien into four.  He made it so simple; I knew this was the way to go!  Drawing inspiration from his style, I came up with my own, using Manila Hokkien as the basis, and made a spelling system that combined English, Tagalog, and some elements of Mandarin pinyin.   On May 20, 2017, we conducted the event which we called “Hokkien Pala!” and was attended by 15 non-Hokkien speakers, with my parents as guest observers.  You will just have to take my word for it that it was a huge success, and there is a clamor for more!

I admit, I did not like Hokkien at all.  In my alma mater, I was being taught Mandarin by translating it into Hokkien, and I really hated it because both were foreign to me.   I knew survival Hokkien, and that was enough to get me by, but not in an academic setting.  I never taught my nephew Hokkien, preferring instead to start him early in the more prestigious Mandarin. Besides, many Chinoys speak Hokkien mixed with Tagalog and English anyway, it’s the norm!

One last thing:  Does knowing Hokkien automatically make Mandarin learning easy?  How about vice versa?  Well, yes and no.  Yes, because many grammatical concepts are shared by the two languages and some words sort of sound the same, but majority don’t!

We have to pass on Philippine Hokkien to the next generations to come.  Its complexity and multifarious forms, which initially proved to be deterrents for me to move up the proficiency scale, are exactly why we need to keep it from dying.  If we can provide both informal and formal avenues to learn it, it stands a greater chance of surviving the times.

Read more on how some Tagalog words have Hokkien origins on Asian Dragon’s June-July 2017 issue, available for download from Magzter.