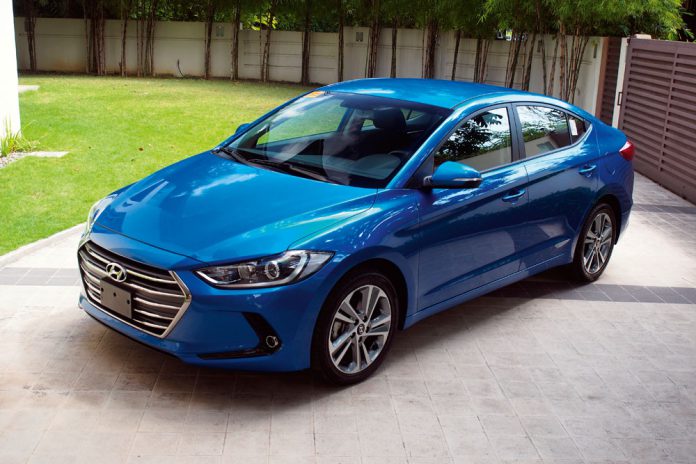 In 2012, compact sedans were becoming boxy and boring. Then the Hyundai Elantra came along, with its unabashedly curvaceous body, and shook things up in this category. In looks alone, the Elantra was a veritable peacock among a flock of turkeys.  In our review of that car, we praised the Korean carmaker for its outside-the-box thinking and daring design. It sparked renewed excitement in the C-segment, and soon its competitors Toyota Corolla, Mazda3, and Honda Civic followed suit with their own radical models.

Five years later, Hyundai Asia Resources Inc. lent us an all-new Elantra, now built with Hyundai’s Fluidic Sculpture 2.0.  This design language is not a reboot, but a sequel to the intrepid original. There are still some flowing curves, but the shape of the sheet metal is not as exaggerated as its predecessor. With tempered angles and straighter lines, this sixth generation Elantra looks all grown up. The baby fat is gone, and the body has now become sleeker, harder, and more chiseled.

The Elantra is hard to miss, especially when it sports the Hyundai Hexagon—or what we like to call that gigantic grille that is front and center in most Hyundai models.  And it is not a bad thing; we loved it in the Santa Fe and Tucson, and it looks just as perfect here. The bumper has L-shaped vertical slits that form the squared jawline of the fascia, and they serve to hide the fog lamps, as well.  Whereas the previous model had bulbous fenders, this new one opts for a flatter look.  From a side perspective, the sloping roofline merges seamlessly into the trunk. The boot lid ducktails into a sort of built-in spoiler, and the simple taillights reciprocate the shape of the headlamps. Like in the Tucson we reviewed in the previous issue, the window line in the rear door panel swoops up in the C-pillar, thus hiding the passengers from view. Rolling stock are 17-inch alloy wheels, and these round out the look to make the Elantra one handsome sedan.

Inside, the Elantra has done away with the artsy curves of the previous model. The driver-centric dashboard is a two-tier setup with instrument panels and AC vents encased in polygons. Providing detail are touches of gloss black and matte silver, sprinkled sparingly throughout the cabin. At the center of the dash is a five-inch, Bluetooth-enabled touchscreen monitor. This display also streams the video from the reversing camera. Cabin climate is automatically set with dual-zone AC controls, and rear passengers get their own vents. In the back, knee room is good, and there is ample shoulder space to squeeze in three adults.  One nitpick is that while there is leather on the steering wheel, the seat surfaces are stitched with a black fabric in a honeycomb pattern.  Since the review unit is the top-of-the-line version, leather seats should have been standard.

There are little surprises, though, that made our experience in the Elantra memorable. The side mirrors auto fold when you leave the vehicle, and with the key fob still in your pocket, they unfold when you come back. Also like magic, a light in the exterior handle automatically turns on just before you reach out to open the car door.

A push-start button wakes the 2.0-liter four-banger, and this engine harnesses 150 horses and 192 Nm of torque at 4,000 rpm. On the road, we expected lots of oomph from the get-go, but what we got instead was, um, just adequate power. The engine is oversized, especially when mated with the Elantra’s body, which weighs in at just 1,780 kg.  But when we put the pedal to the metal and let the six-speed AT handle the gear changes, the Elantra was slow to rev. With no drive selector, we put the shifter to manu-matic, pacing the transmission ourselves. This unleashed the beast in the powerplant, as the needle quickly pointed past 100 kph. We wish this car had Continuously Variable Transmission, or paddle shifters at least. The good news is, the low rpm in traffic made for decent fuel economy, as the Elantra did an overall 7.9 kilometers to the liter, at an average speed of 21 kph.

The Elantra is extremely nimble in narrow streets, ably avoiding the illegally parked cars, tricycles, and vendors. The electronic power steering eliminates effort, but it also reduces the feel of the road. What it takes away in sporty handling, though, it gives back in an acceptable turning radius of 5.3 meters.  We paced the Elantra through road reblocking season in the metro, so the lunar surfaces really put the suspension to the test. The McPherson Strut in the front and Tubular Beam in the rear absorbed the bumps and kept the shakes to a minimum.  Decorum was maintained in the cabin, with little to no external noise seeping through the insulation.

Prices begin at P918,000 for the basic 1.6 liters with manual transmission, and the automatic costs P1,018,000. The 2.0 GL is pegged at P1.038 million, and if you add 120 grand to that, you get our top-of-the-line 2.0 GLS here at P1.158 million.  This Korean compact is not cheaper than its Japanese counterparts, and it shouldn’t be. In terms of specifications, accoutrements, and design, it is on equal footing as the competition from Nippon.  It might have an uphill battle against the Corolla, Mazda3, and Civic, but the Elantra has definitely brought its A-game to the C-segment. AD